The Top 5 museum exhibitions to see in June

Carlos V. Mitchell May 29, 2022 Discovery museum Comments Off on The Top 5 museum exhibitions to see in June 5 Views

Tabish Khan the @LondonArtCritic chooses his favorite museums and institutional exhibitions in London. Each comes with a concise review to help you decide if it’s for you. Those looking for more exhibits should check out his top 5 for East London where all but one remain open.

Kyosai: The Israel Goldman Collection @ Royal Academy of Arts
From a man comically kicking a demon in the air, to a battle where people were traded for frogs, there’s a great mix of satire and humor. in the magnificent paintings and drawings. Kyosai is a new discovery for me and it’s great to see the work of this 19th century Japanese artist. Until June 19.

Pissarro: Father of Impressionism @ Ashmolean Museum, Oxford
Pissarro is not the first artist that comes to mind when it comes to the Impressionists, but this movement owes much to his versatility of styles and the groundbreaking work he did experimenting with painting. This show brings together its etchings and stunning landscapes to make sure it gets the credit it deserves. Until June 12.

Deutsche Börse Photography Foundation Award 2022 @ The Photographers Gallery
It’s been a good year for this annual photography award with finalists covering important issues such as apartheid, the black experience and the conflict in Northern Ireland. My favorite is the work of Anastasia Samoylova who looks at the impact of climate change on America’s coastal cities, through beautifully composed shots. Until June 12.

A Century of Artist’s Studio @ Whitechapel Gallery
The artist’s studio is where the magic happens and this show offers insight into the creative process of different artists, from Henry Moore to Kerry James Marshall. The strongest elements being the installations comprising recreations of parts of Matisse’s Red Room, Warhol’s silver factory and abstract block shapes for Kurt Schwitters. Until June 5.

Wild and Cultivated: Shaping the Rose at the Garden Museum
A rose by any other name would still be just as sweet and just as influential. This small but varied exhibition shows how she has influenced everything from fashion to fairy tales. It examines how, in ancient Rome, flowers were associated with masculinity, down to the roses on Wedgewood tableware and floral dresses. Until June 19.

Art critic for FAD and Londonist. Visit as many exhibitions as possible and write reviews, opinion pieces and a weekly top 5 for FAD.

Marina Abramovic finally gets her show at the Royal Academy after being delayed twice by COVID. The show will […] 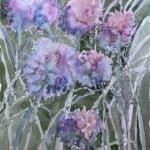 In autumn 2022, the Royal Academy of Arts will host a major exhibition of the work of the famous international […]