If you’re going to get picked up, it softens the blow somewhat so that it’s the New York Times it does it.

Brett Sokol from Time released a report today that openly questions the veracity of the 25 works by Basquiat hung in the exhibition that just opened at the Orlando Museum of Art Heroes and Monsters: Jean-Michel Basquiat, The Thaddeus Mumford, Jr. Venice Collection. The exhibition consists of “never seen” works by Basquiat, and it has been positioned as a stunning coup by the OMA and its new director, Dr Aaron De Groft.

Orlando Weekly received a tip in the weeks leading up to the opening of heroes and monsters that questions were being asked about the provenance of the parts. Our tipster claimed that a gag order was issued to staff by museum superiors and that computers were seized from the museum by the FBI.

We ourselves experienced great difficulty obtaining press materials for the show, which had never been an issue before with OMA. Maybe it was unrelated, but in combination with the rumors, it made us wonder.

And of course, the story is too good to be true: a cache of forgotten works by Basquiat found in an abandoned storage locker, a year old the artist was at the height of his powers. As Kyle Eagle said in his report on the show’s opening, “It’s the equivalent in the art world of going to Vegas having never played poker and being dealt a royal flush.”

He was referring to the fact that Mumford bought the work for $5,000, but that goes for OMA as well. There is something almost cinematic about the discovery of these pieces, but, writes Sokol, “De Groft bristles[s] in the face of such skepticism. “My reputation is also at stake,” he said in an interview. “And I have absolutely no doubt that they are Basquiats.” Beyond his own trained eye – he has a doctorate. in Art History from Florida State University – he cited a battery of reports commissioned by the current owners of the artworks.”

Besides the conflicting reports referenced in the NYT story, there are many shades of gray possible here – it’s not just a matter of A: They’re 100% real or B: They’re fraudulent. The art might be real, but the provenance is sketchy. To my admittedly untrained eye, they look like studio trash: preliminary sketches for larger works or random scribbles, possibly made by the artist, or perhaps by his friends hanging out there. The fact that he was in Los Angeles with Toxic, Rammellzee and other creatives confirms this; the materials (cardboard boxes, sometimes double-sided) also support it.

But even if Basquiat’s hand made those marks, or some of those marks, does that make “Untitled (Face with Orange Halo)” the artistic equivalent of, say, “Notary”? See both below: 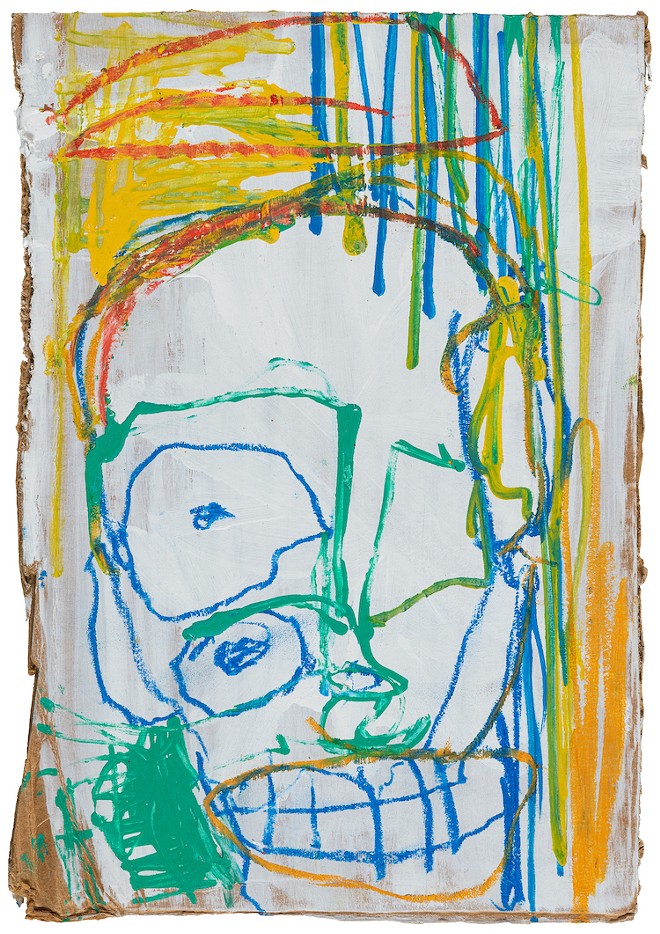 It won’t surprise you to know that we haven’t received a comment from the museum yet, but when they release a statement, we’ll add it to this article. There’s no doubt that there will be plenty more to come in this developing story.

–
Stay up to date with Central Florida news and views through our weekly newsletters and consider supporting this free publication. Our small but mighty team works tirelessly to bring you news from Central Florida, and every little bit counts.